The Different Types of Cooling Towers 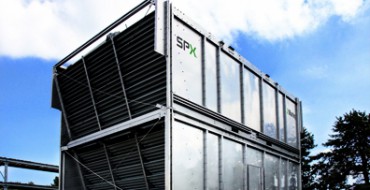 A cooling tower is an industrial technological process that is used to release heat back into the air. Cooling towers are used in a wide range of industries factories, warehouses, chemical plants, power stations, refineries and facilities with large heating or air conditioning systems, known as HVAC.  Cooling towers can usually be adjusted for a variety of factors, including performance, structure, drift and plume abatement.

Cooling towers take water that has been heated in an industrial process and spray it through nozzles onto materials called “fill.” Once on the “fill” material, the flow of the water through the tower is slowed, and thus exposing more water surface for the highest level of air-water contact. As water falls down the tower, the water hits air moving through the tower by an induced draft fan. This causes a small amount of water to be evaporated, creating a cooling action.

This newly cooled water is then pumped back into the condenser or other processor. Here, the water is ready to be reheated and again used for its industrial process.

Some cooling towers are assembled at factories and transported to the location. Small towers can be shipped intact while larger systems may need to be assembled on site.  Factory assembled towers can sometimes be referred to as a “packaged cooling tower.”One example is the Marley NC crossflow, induced draft tower, which is a popular option for HVAC or light industrial applications.

Some cooling towers have to be built on-site. These are field-erected towers and are primarily constructed at or near the site of the industrial construction. The manufacturer or service provider will generally provide the labor. Field-erected towers can be of crossflow and counterflow technology and often needed for power or heavy-industrial uses. One popular option is the Marley F400 counterflow tower, which can be customized to meet your exact specifications.

In crossflow towers, the water flows vertically through the fill and the air comes in through a horizontal direction, cutting across the flow of the descending water. This eliminates the requirement for air to flow through the distribution system.  This allows for gravity to be used to filter the hot water into basins.Counterflow cooling towers utilize the upward flow of air, countering the flow of falling water. This vertical airflow makes it impossible to use gravity-flow basins. Instead, counterflow towers use pressurized spray nozzles to distribute the water over the top of the fill.